I'm sat here nursing my first coffee of the morning at 10.22 feeling like death warmed up.  I knew I'd feel like this, I'd expected it.  In fact I should be feeling worse, which would be OK if I'd actually done what I intended to.

To quote the distinguished gentleman Mr Craig David, re-re-wind....In October I sat staring at my computer screen pressing F5 repeatedly as the seconds counted down on the Strathpuffer entry screen.  The Strathpuffer for those that don't know is a 24hr MTB endurance event with a twist (like riding an MTB for 24hrs isn't twisted enough).  Its held in mid January in Northern Scotland, a place notorious for its non-tropical climate in the height of summer let alone the depths of winter.  Strangely it sells out in minutes so I knew I had to be quick.  At which point my Mac threw a fit, wouldn't reload the page and by the time I'd logged back in it had sold out and I was on the waiting list.  Damn and indeed blast.

The plan had then been to train hard for 3'ish months to get in shape for it and do a good ride (see a pattern here?).  However it didn't happen so I slacked off over Xmas with a view to starting training like a mad man for the TCR in Jan.  Then, two weeks ago I got an email telling me I'm in.  To the Strathpuffer.  Damn and indeed blast again.  At the time I had the dreaded Man Flu so bar some riding over Xmas, I'd done...well nothing.  Obviously  I immediately thought this was a brilliant idea, called my brother and roped him into being my Pit bitch for the weekend.  I may have left out crucial bits like 'its for 24 hours' and 'its miles away from anywhere in a frozen field' but I thought I could leave those details for a later conversation.

Over the next week, the more I thought about it, the less I wanted to do it.  I rang Ben and we had the talk.  His immediate reaction was 'That sounds shit, lets go somewhere else and ride'.  Followed by 'I'm not doing it, you're on your own' or words to that effect.  So a new plan was formed.  We decided to go to the Scottish boarders and ride two of the Seven Stanes, a trail network set up by the forestry commission in Scotland.  I booked a hotel, got all my kit together and got excited.  Plus, being 'South Scotland' the weather would be better, wouldn't it?

Thursday swings round and with a loaded car I head up to Ben's after work.  Ben lives in Sheffield.  I love everything about Sheffield apart from the fact its frigging miles from where I live and work (London).  I get there late, we go for pie and chips then have an early'ish night after trying some fine Scottish Single malt to get us in the mood.  Note - I'm not a whisky buff, I know nowt about it.  It could have been murky dishwater for all I know but I did sleep well....

The next morning I awake feeling like i've been hit by a tram.  Ben fetches breakfast, we pack up and head off for Peebles.  Although being Wil & Ben, this means muchos faffos and we leave around 1pm.  By around 4 PM its dark and snowing.  A lot. 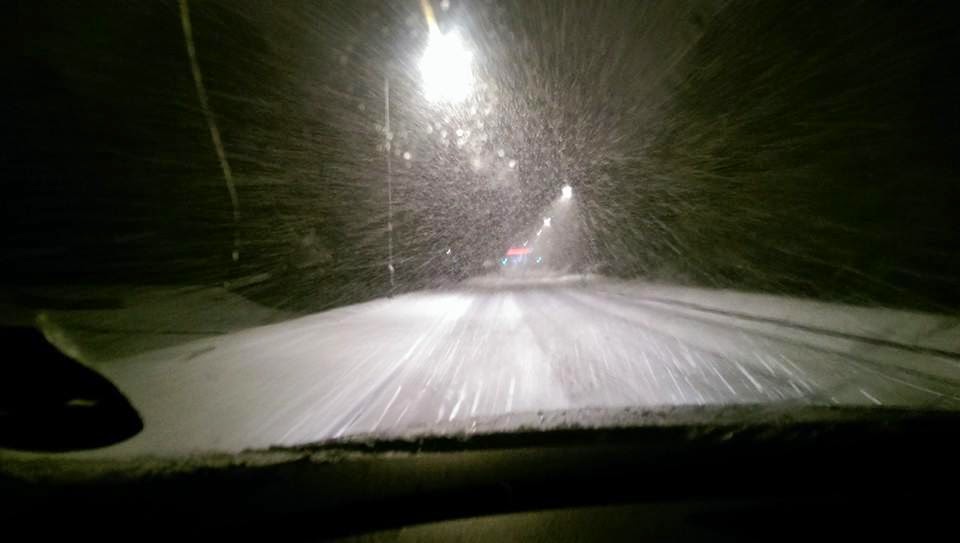 Above is the picture before it got heavy.  Ben was too busy hanging on for dear life to take pictures beyond this point.  We had 33 miles to go before getting to Peebles and it was touch and go whether we'd make it.  For 20 miles we never made it about 15mph, but we finally made it to the hotel in Peebles.  Recounting our EPIC tale to the woman behind the counter, she looked dead pan at me and said 'First time driving in snow?'....cheeky mare..

Anyway - despite the baltic conditions we got some good riding in and the views were stunning.  The trails were mega slippery and on the Saturday we had a hike-a-bike section for about an hour in a total whiteout - terrifying but awesome at the same time. 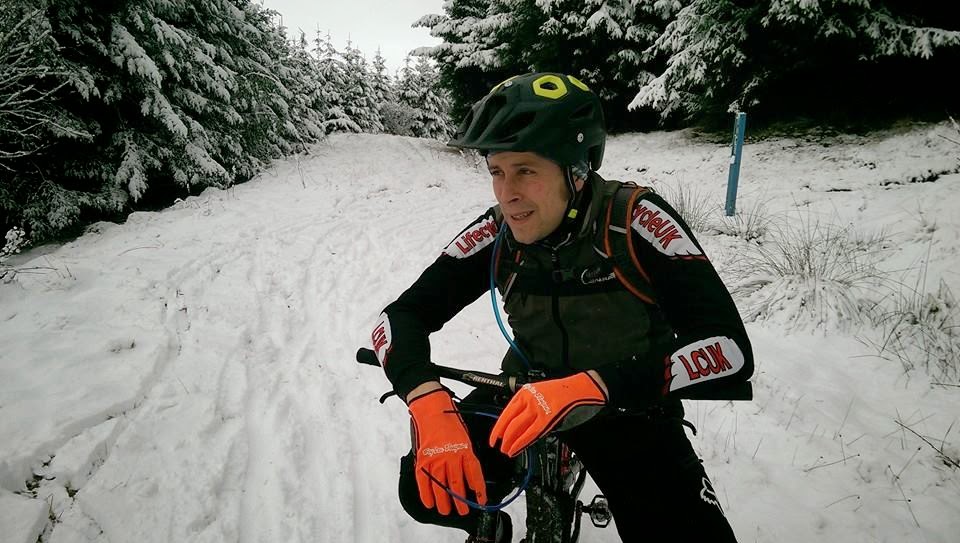 What did I learn that might be of use to the TCR?  Erm, Maxxis High Rollers are rubbish in snow?  But seriously, clothing wise layers are clearly the way to go.  The TCR should be a good deal warmer but at least I know I've got the right stuff for the really nasty weather.  And if all else fails, the Air/Sea rescue helicopter will see my gloves. 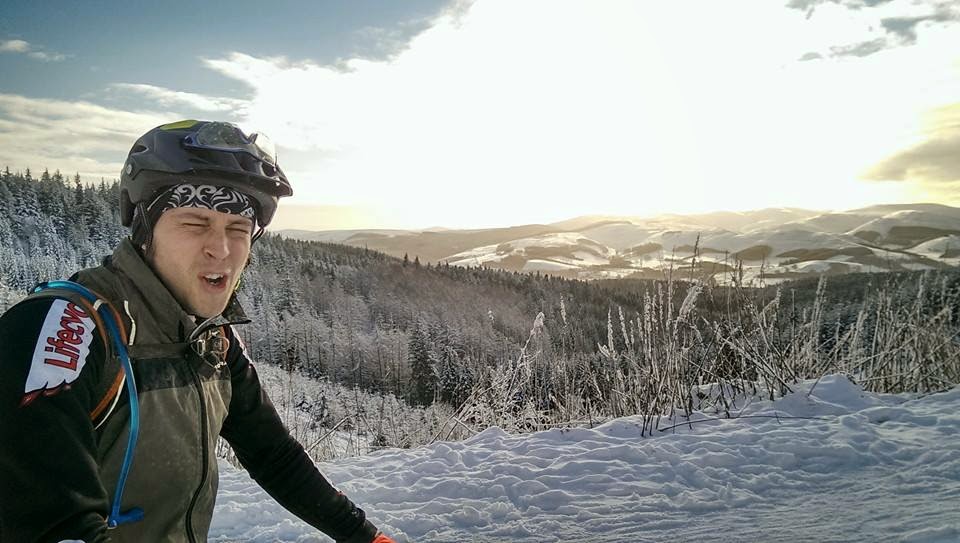 What I'm trying to convey in this picture is how cold it is.  What I'm actually conveying is that I'm an idiot that shouldn't be in photos. But the view eh.... 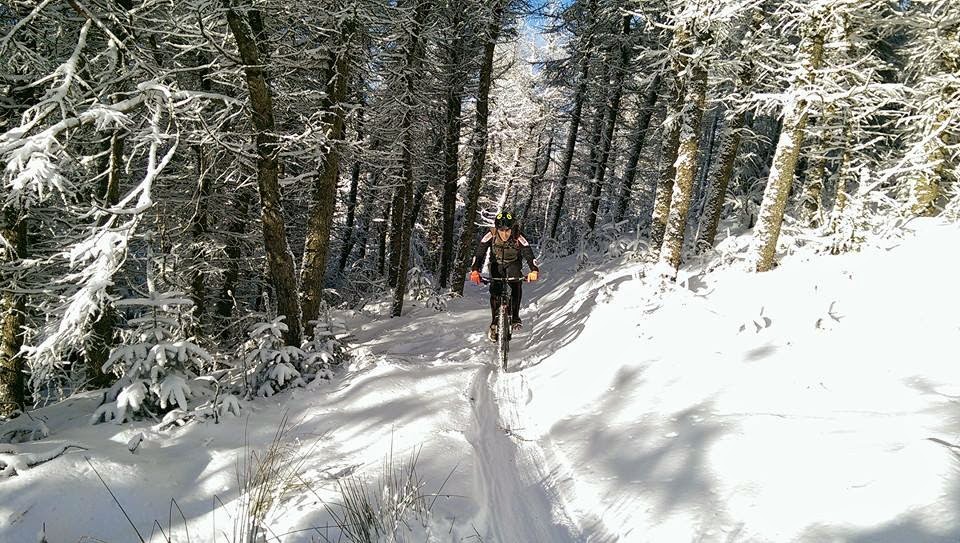 So after a long drive back yesterday dropping Ben off in Sheffield on the way, I'm ruined this morning.  Not in the way I should be, but I'm slightly thankful of that as I know after the 12 hour in October it took me a few weeks to get over it.  I've got the day off today so off for a ride once the ice has cleared a little. Or maybe just a mega session on the turbo.  But the good news is, I've lost about 6 lbs in weight over the past couple of weeks - which is nice.  I think I left most of it on some Scottish hillside but either way, adding lightness can only help!
Posted by Angry Kitch at 02:50