From my end, not so bad.  I've done three longish turbo sessions this week and I'm just procrastinating going out in the cold for three hours.  I'm still fat as although I've increased my mileage, I'm eating like a horse.  Also managed to pick up a snotty nose from the train (the bucket of all illness) but its nothing like SUPERDEATHFLU that I had at Christmas so its not really affected me.

Bike choice is still very much up in the air, at this rate unless I win the lottery it looks like I'll be riding the winter bike with some borrowed aero wheels.  (If you're a geek like me) then bike choice is an interesting one.  I've got the old cycle to work scheme - for those not in the UK, this is a scheme where your employer can buy a bike up to the value of £1000 and you make monthly repayments through your wages prior to tax, so tax free bike - so thats a potential, but the question is what bike do I pick?

Due to the above scheme a lot of bike companies are doing pretty nice bikes exactly on the 'grand' mark so I'm not short of choice.  But what do you go for?  The top three finishers last year seem to comprise solely of road bikes with tri-bars.  From memory there were no disc brakes and more of a nod was given to speed rather than comfort. I've looked at the AWOL bikes that the two riders used last year, but they look BLOODY heavy for what they are and I struggle enough on the hills without making a rod for my own back.  I've also ridden a few of these adventure bikes and I was less than impressed.  Salsa's Vaya looks lovely and has all the right stuff - comfy position, disc brakes, external BB - but having ridden it, it felt slow, cumbersome and generally just hard work.  Similarly any Surly I've been on feels like its made from Dark Matter.  I'm sure when you're crossing the Ganges its ideal as it'll not let you down, but I can't stomach the idea of starting with a 30lb bike before I've put anything on it.

Disc brakes are a must though, not least because I've got the opportunity to use some Reynolds Assault carbon disc wheels which are super trick.  I also like the slightly more racey geometry - the sit up and beg style I struggle with as it puts too much weight on my back. I loathe press-fit BB's with a passion, so it'll have to be either threaded or converted with one of the Rotar conversion BB's.  I also don't like full cable disc brakes.  I've had Avid BB7's on a couple of bikes and they take constant maintenance to work.  Yes, they're simple to use and fix if they go wrong, but they lack power and the constant pad adjustment is a pain in the arse.

Bar the bottom bracket, I like the GT Grade.  Alloy frame, half hydro discs (they're the TRP model with the calliper holding the fluid and being activated by cable) and SIIILLLLVVVEEEERR.

Oh, and I've always loved the GT triple triangle - this reminds me of a Zaskar.  The bits on it aren't great but I have enough parts to make it a bit lighter and robust.  I'm between sizes, either an XL or an L but I'd probably go for the smaller one as I'd rather not be riding a gate.  The geometry matches my winter bike pretty much, bar a slightly longer head tube.  This will be handy for tri bars as it means I don't have to get into a full on race crouch to use them.

Other options include the BMC GF02, although this is slightly over budget (for Bike's to work) and has a slightly lesser spec than the GT (not that it matters as I'll replace the bits I don't like)

Finally, my brother suggested the option of buying a cheap frame, try it for size and then just keep changing it until I find something that fits and works well.  The problem there is that cheap disc road bike frames are not exactly in abundance so I'd probably be limited to something from Planet X, who I'm loathed to use after being royally messed about in the past.

Oh, and there's one more option.  In my mum's garage, tucked away at the back is an old Airborne Carpe Diem.  It's an old alloy cross frame cum tourer and its done a LOT of miles.  In fact, looking at it, its knackered - however I know it fits, its disc brake compatible and for an alloy frame its pretty comfy.  The picture below is from about 4 years ago, its currently just a bare frame and VERY heavy Kona fork.  I do however quite like the idea of snazzing it up with a new paint job, some nice parts and using it.  Waste not want not and all that.  So maybe thats a potential project in the making.... 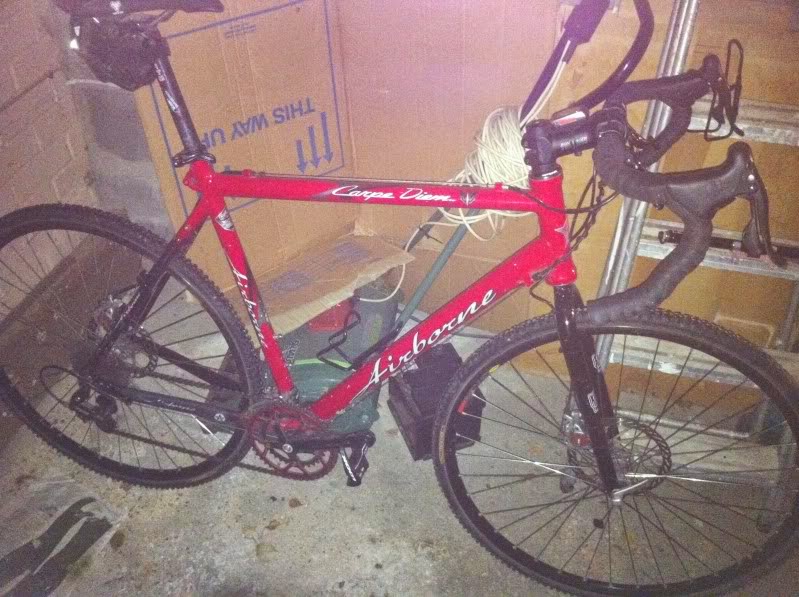 Look at it, what a stunner.  However it does hold some sentimental value as I did my first tour on it and it performed faultlessly (although not with Campag on it!).  Check out the BB7 brakes too, they were awful.  Maybe I'm just not tolerant enough to deal with cable brakes.  Anyhoo, it'll need a fair bit of work and a lick of paint to bring it back up to scratch but...well....I think I'm talking myself into this as I type....

Project Crap Dem is on!
Posted by Angry Kitch at 03:45