Soooo, a bit of a different post today not really related to the TCR or training - just a bit of a reflection on current situations and stuff - ignore this one if you want a tale of how rubbish I am at committing to things and getting my training done (another non-riding day today by the way).....

As children brought up in the rural countryside in Suffolk, there wasn't a lot for my brother and I to do.  With cousins heavily into cars, lorries and all things mechanical we both had an avid interest in anything engine related - I can still tell you the make and model of a truck just from the rear mudguards - I kid you not.

Anyway, our house had a garden that pretty much ran the entire perimeter of the property and it allow us to set up a race track.  I say pretty much, as there was a small foot high wall on one side that required a plank place precariously that would allow us to charge full bore into the back garden, sweeping round the silver birch and then plummeting down the steps on the other side of the house to complete a lap.  Many, many hours were spent racing laps, Ben on his trusty Emmelle with 20 inch wheels and me on my Universal with new at the time 26 inch wheels.  After a Sunday lunch and avoiding any homework I decided to put in a few hot laps.  Head down racing for the plank, I missed it and piled straight into the wall.  I pulled a clean front flip without the bike and landed on my feet, very much in shock.  The bike didn't, having taken full force through the forks bending the down tube and top tube at roughly 45 degrees.  My mum and dad went ape shit, sending me to my room and giving me a thorough bollocking in the process.  The Universal was done, the front wheel touching the down tube, it's days of hot laps were finished.

Following a miserable summer with no bike, my parents finally allowed me to buy a second hand racer from a grubby little bike shop in Stowmarket.  Steel 531 frame, alloy wheels and such, it was pretty awesome for £95...yes, ninety five sterling.  I spend more than that on a tyre these days...Anyway, after doing 'the 7 miler' a number of times, a friend of the family who happened to be a big time trialer suggested I join the local club and start doing TT's on a Wednesday night.  The local club, The Wolsey Road club, was run by two truly lovely people - Don and Olive Forsbrooke.  Both of them were old school riders and by old school, I mean they rode everywhere.  I remember going to their house once (I would have been about 16) for club mince pies and sherry at Christmas and got talking to one of the old boys of the club.  He was 84 at the time, still rode a fixed gear and still raced 12 and 24 hour time trials.  I was blown away, I'd only ever managed 10 and at a push, 25 mile time trials and here was this old boy still smashing out mega miles each week.  Don and Olive were the same, Olive was well into her 60's when I first met them and throughout my teenage years and into my early twenties I'd see her riding to and from Ipswich with her panniers laden up with shopping.  Whatever the weather, Olive would be out there smashing the miles out.

Don's garage was the stuff of legends.  Multiple bikes of all different disciplines hung on the wall, tool chests and bike stands ready to service whatever needed servicing.  When I couldn't fix my bike with the hammer, wood chisels and flat head screwdriver that my dad had in his garage, I'd push my bike to Don's in the nearby village and ask him to help me.  The man was an artist when it came to fixing bikes.  No amount of superlatives could do him justice, he was like a surgeon.  I remember opening a drawer in his toolbox and seeing no less than 7 different bottom bracket tools - remember, this was in the day when 'standards' were just that and you didn't have press fit, external or any of that rubbish.  I asked him why so many, and his reply was 'Right tool for the job'.

Don passed away a few years ago and sadly Olive also died at the tail end of last year - two people who I wish I'd made more of an effort to see before their passing.

Anyway - why am I boring you with this??  Well, I've been without a car for the past couple of weeks due to...well, buying a shit car.  So I've had to resort to doing everything via the bike.  Shopping, getting to the station in a morning, running errands - all by bike.  I've also picked the worst part of the year to do this, its bloody cold and often raining.  However, its awesome.  Yes I feel smug, and quite self righteous and I also feel like a bit of a tramp when I pull into Tesco's with my panniers and park up with all the old drunks who've ridden there to buy their scotch.  But I reckon I'm a fair bit quicker than those in cars and I'm also getting extra miles in when I'd just be sat there getting angry at Nick friggin Grimshaw and wondering if the noise my car is making is a noise it should be making.

Anyway - why the lengthy nonsense at the start?  Right tool for the job...When I first moved to the London area proper I thought I needed a folding bike like all londoners.  I couldn't stomach paying a grand for a piece of hi-tensile steel also known as a brompton, so I bought a tern folder.  Nice spec, 20 inch wheels and v brakes.  It was and is utter shit.  For those that have never tried one - don't.  20 inch wheels and a big hinge in the middle do not a good bike make.  I risked life and limb on it for a year before sticking it in the attic and buying a proper bike on the bikes to work scheme.  I work in Canary Wharf, there's an Evans in Canary Wharf. And my bikes to work thing uses Evans.  A peruse of their website gave many options but the one that stood out was a Charge Grater.  Internal hub gear (OK, its an Alfine 8 rather than a Rholoff), hydro disc brakes and 700c wheels sounded pretty good for £650 notes.  Not something I can get excited about but adequate for what I needed.  It turned up and I collected it with Ben.   Ben seemed impressed.  I fitted a rack I had lying about, changed the saddle for an old Fizik Gobi that I love (there was nothing wrong with the Charge Spoon fitted but I do like a Gobi) and changed the stem for a longer one I had in the spares box.  I also purchased some Ortlib panniers on the insistence of Ben, who said they're the nuts.  Turns out, they are! Who knew...

Anyway, after a year of riding to the station every day , plus going into town on it and running various errands I'm smitten.  It's my most ridden bike.  In the past two weeks I've worked out I've ridden about 150 miles on it getting to work and getting shopping and the like.  Yes, at times I've got wet and yes, my legs hurt a bit when I go out training but thats 150 miles essentially for free.

Additionally I have to pay to park my car at the station, £5 a day.  In a year, there are 253 working days (for 2015), minus my holiday of 25 days plus any sick days or working from home leaves about 220 days.  Multiply that out and you're left with £1100.  And remember, thats just parking and not accounting for petrol to and from.  Not bad eh!

Ahh, I hear you say - but what about maintenance on the bike.  Well, I've had it a year now and so far its cost me...nowt.  I've pumped the tyres up twice and swapped the grips out for some crazy expensive Ergon ones with built in bar ends and I've also swapped the pedals for some clip less ones I had in the spares box.  Other than that, nowt.  The internal hub gear means that the chain doesn't see nearly as much strain compared to a normal setup, hell I've not even oiled it. 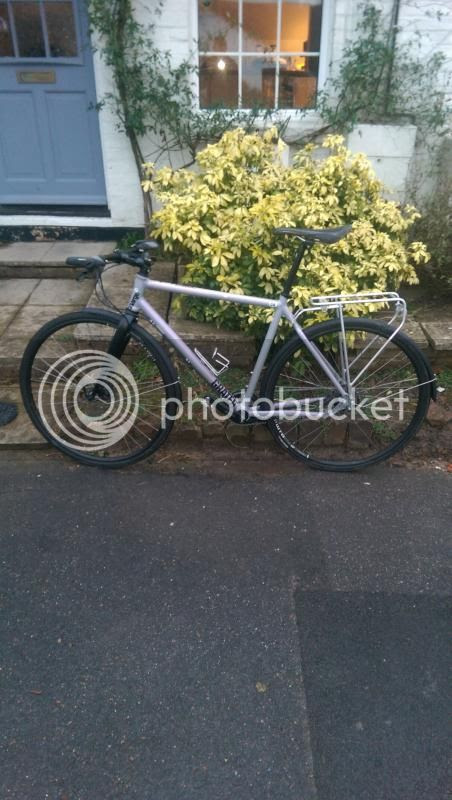 I've not washed it, fettled it or done anything to it.  It gets dumped outside the station all day whatever the weather, bashed into by other less careful commuters and still comes back for more.  To be fair, when I got it, I did strip it down and re-grease everything and tighten all the bolts as I don't trust Evans.  But other than that, nowt.  Its fricken brilliant and easily my most used bike.

I don't wear lycra, I don't even wear a helmet (naughty).  Sat on the sofa thinking I need a few beers and some stuff for tea, I just grab it and head to the shops.  Lights wise I use a couple of Leyzene type affairs that are ok, and the lock is a simple combination thing - neither of which are great but do the job.  There's a Garmin mount attached but I've yet to put my Garmin on it.  Why would I, its just one more thing to have nicked when I forget to take it off.

Its a lovely thing, riding along not watching my heart rate or thinking that I need to do another loop to get the miles in.  I wear stuff that I can be seen in public in, with the panniers I can do a full shop and get it all back before my beer has got warm or my ice cream has defrosted.  Obviously being the massive bike geek I've thought about maybe changing the hub to a Rholoff one and maybe rebuilding the wheels onto some carbon rims.  And maybe changing the seat post to a carbon one and putting some flasher bars on it.  But then that would ruin it, it would be something I'd worry about when I chain it up at the station and what benefit would I get?  It would be a bit easier to pedal up the hill from the station?  So what...

It's the one bike I'll never sell.  In my opinion, if everyone got over the idea that they need a Wiggins replica for the Sunday poodle, this is the bike most people need.  It's the right tool for the job and it does that job very well.
Posted by Angry Kitch at 09:58